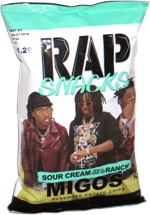 Taste test: These potato chips had a strong yellow color, with somewhat wiggly shapes and lots of large green seasoning bits on the surfaces. Several of the chips at the top were very large.

We crunched in to find a light crunch, and a fairly mild but really tasty flavor from the mix of sour cream and ranch. They were probably right to use the word "dab" in reference to the ranch, as it wasn't strong, but the combination of that with sour cream created a flavor that was noticeably different from anything else we've tasted, quite good!

From the package: ” 'Dabbin is a lifestyle' — Migos”