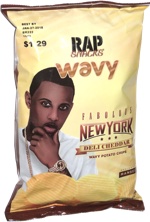 Taste test: These wide-rippled potato chips had lots of seasoning stuck to those ripples, most of it orange, but with some green and other dark bits as well, for a strong orange color, with many variations in density of seasoning.

We crunched in to find a very nice texture, light and very crisp, with a taste that was consistent with the aroma of the bag, but was nonetheless a surprise, as it was basically a sweet barbecue flavor — and a good one. I was expecting a sharp cheddar taste, and perhaps there was some of that in there, but it was tough to even notice in a barbecue-dominated chip.

From the package: “Stop tryna skip the struggle. That's where character is built ... the hunger for more is created ... the lessons for success are taught... so embrace it, feed off it, learn from it ... & then overcome it so you can become it.”