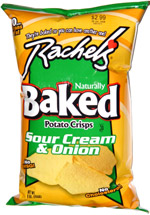 Taste test: These potato crisps were nearly flat, with an unusual (but symmetrical) shape.

They were a bit thicker and crunchier than Baked Lay's, but the crunch seemed very bland and cardboard-like, and the flavor was also quite ordinary. It was not particularly creamy or oniony, but maybe just slightly so in each case. This is one of those cases where the chips that boast being low in fat end up being low in taste as well. Not a very satisfying sour cream and onion chip.

From the package: “Rachel's Naturally Baked Potato Crisps are a healthy choice for everyone! With a 1/2 gram of saturated fat, 0 grams trans fat and only 3 grams of total fat, they're always the right choice. Plus, they taste great! What more could you ask for in a low fat snack?”