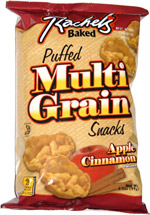 Taste test: These rice cake-like snacks had the typical mini-rice cake sort of shape, with a pale beige color and lots of cinnamon sugar visible on the surface.

They had a nice crunchy and fairly crisp texture, and they tasted quite good as well, with lots of cinnamon and apple flavor. There appeared to be a lot of sugar on the surface, but they weren't overly sweet. Just sweet enough, excellent.

Smell test: Very nice. Smells like cinnamon toast with a bit of apple.

From the package: “Here at Rachel's we're proud to serve you only the best in great tasting snacks. So it only makes sense that we're happy to introduce yet another delicious and healthy addition to our lineup.” ... “Packed with sweet, fresh, crisp apple flavors, lightly dusted with cinnamon and mingled with real whole grains for an unmistakably hearty and wholesome taste.”