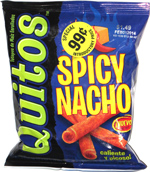 Taste test: These rolled-up tortilla chips had a color similar to the original Nacho Cheese Doritos, and their "Spicy Nacho" flavor name was also right out of the Doritos playbook. They looked much more like Takis than Doritos, as they were rolled up, but they didn't mimic the Takis look precisely — these were rolled even more tightly than Takis, and each tube was longer.

We crunched in to find a very solid crunch and mostly a nacho cheese tortilla chips flavor, but not a strongly cheesy one, as the corn was as noticeable as the cheese, at least at first. The "Spicy" part of the flavor did arrive later in the form of a reasonably hot aftertaste. Not one of the boldest flavors in the rolled-up tortilla chips category, but very solid if you intend to dip them in something. Even if you don't want to dip, still a pretty good taste.

Smell test: Not much cheese. Not much else either.