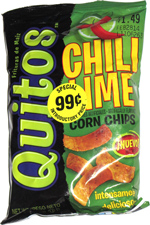 Taste test: After being introduced to the Quitos brand through the Takis-like Spicy Nacho and Hot Chili Lime flavors, this one was a bit of a surprise, as the chips didn't have the tubular tortilla shape and instead were shaped like Fritos. They had some light orange seasoning with some dark spots, but they still looked basically like Fritos.

We crunched in to find that they were made from Fritos materials and had the Fritos texture, with just a bit of additional flavoring. The flavor was vastly different from the Hot Chili Lime Quitos — they didn't just drop Hot from the name here. The hot ones were indeed quite hot, and these were only very slightly so. There was some chili lime flavor, but it was subtle, and the level of flavoring varied from one chip to the next. Some had very little. There was a moderate heat after eating a bunch of chips in a row, but it was still an order of magnitude less than the Hot version. Tasty and good.

Smell test: Mix of corn with chili and lime, but not strong in the spices.