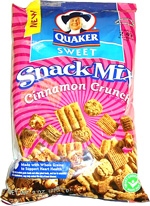 Taste test: This snack mix consisted of Sun Chips, Quaker Oatmeal Squares, Life Cereal, miniature oatmeal cookies and caramel corn, and everything was covered in cinnamon, so it almost felt like we should have been eating it for dessert instead of a snack.

All of the pieces individually were good, although the cinnamon-flavored multigrain Sun Chips weren't that good. There were too many of the Sun Chips, and the large size of those chips dominated over the other smaller pieces. The caramel popcorn pieces were good, and I wanted more of them to offset the taste of cinnamon. This wasn't my favorite of the Quaker Snack Mixes that I've tried. I prefer the saltier versions. But if you have a sweet tooth and you want something crunchy too, this one is worth a try.

Smell test: Smells like cinnamon French Toast, or Cinnamon Toast Crunch, or anything else that you've had with cinnamon on it.

From the package: “Does cinnamon make you weak in the knees? Well you'd better have a seat then. New Quaker Cinnamon Crunch Snack Mix is not only bursting with a delicious cinnamon flavor, but it also has the wholesome goodness of whole grain Quaker Oatmeal Squares, Quaker Life Cereal, multigrain SunChips and the sweet crunch of mini oatmeal cookies and caramel popcorn. We're sure you and your family will enjoy them.”

This snack was discovered by Keith at Stop & Shop. Review published May 2007.