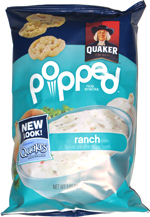 Taste test: We had already reviewed several flavors of Quaked Popped and read the back of those bags, but it wasn't until looking at this one that it occurred to us how unusual something that it said on the bags was. This bag referred to itself as "surprisingly delicious." That's a phrase we've used at times to say we liked something that we didn't think we would. But it was strange for the snack's own marketing copy to do that. Are they announcing that we should expect snacks like this not to taste good?

Anyway, on to the snack itself: Each piece was round, with a very wiggly surface, yellowish overall, covered with lots of seasoning, including some red and green bits, just like the ones pictured on the bag. We crunched in to find that the round rice and corn-based chips had a soft crunch (softer than PopChips) and a mild but tasty ranch flavor. They were a bit on the bland side as ranch chips go, but the taste was not bad. Not the tastiest of the Popped flavors, but OK for a light snack.

From the package: “Quaker® Popped™ rice snacks are the surprisingly delicious snack with a satisfying crunch. And because they're popped and have 0g trans fat, you can feel good about your snack choice.” ... “Do not heat in toaster or microwave."”