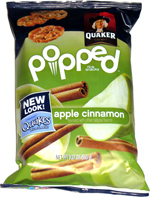 Taste test: These wiggly, roundish, fairly thin rice cakes looked like they had a heavy sugary glaze, as the first thing I noticed was how shiny the surfaces were. On closer examination, it was just some areas that were shiny, not the whole surface, and the surfaces did not feel sticky at all.

We crunched in to find a nice light crisp crunch and a somewhat laid-back apple taste, less intense than many other apple-cinnamon snacks but still plenty flavorful. All I could taste was the apple and cinnamon, as the rice didn't add any flavor that I could notice. Pretty good.