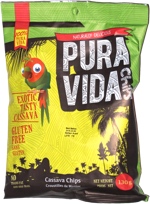 Taste test: These cassava chips had curly shapes with a generally a pale beige color and some areas of a darker beige on the edges of some chips. They were cut thin and came generally in small pieces, including many broken ones.

We crunched in to find a light, crispy crunch and a mild flavor. The crunch and taste of the cassava were noticeably different than potato, with a slightly more rigid feel and a flavor that was just a bit toasty. Unlike some cassava chips with extra seasonings, these kept it simple. A nice taste, especially when I ate several of the chips in a row.

From the package: “What is a Cassava? These tasty chips are from sunny Costa Rica, where cassava grows year-round and Pure Vida is a way of life. Also known as Yuca, the cassava root is originally from Brazil and spread to countries around the world. A gourmet ingredient, cassava can be found in many foods from delicious cakes to irresistible chips, like the ones inside this bag.” ... “Product of Costa Rica" 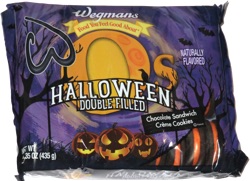