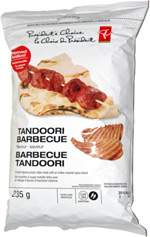 Taste test: These wide-rippled potato chips were generally smallish, with an orange seasoning unevenly applied to the various chips, plus some bits of skin around some of the edges.

The chips were crisp and had a nice crunch, and the seasoning won the day, as our tasters all praised the great mix of spices, which were more subdued than other Indian spiced potato chips (such as Lay's Magic Masala) but were still different enough to stand out from the barbecue chip crowd — really tasty with a mild kick of heat. Spices aside, tasters also enjoyed the great texture of the chips and the excellent potato flavor. Great snack!

Smell test: Kind of a tangy barbecue, with some Indian spices (but less than most Indian chips we've tried).

From the package: “Crunchy rippled potato chips made with an Indian-inspired spice blend.” ... “Improved/Amélioré! Bag Now Resealable/Sac maintenant refermable.” ... “We've seasoned these crunchy rippled chips with our very own masala (spice blend) and other selected ingredients to recreate the great taste, colour and aroma of your favorite tandoori dishes. Take a bite and experience your very own passage to India!”

This snack was discovered by Jeremy at Baldree's No Frills, Gananoque, Ontario. Review published .