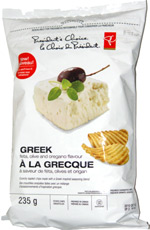 Taste test: These wide-rippled potato chips promised to be flavored with feta cheese, olives and oregano, so they were much anticipated by several of our tasters.

We crunched in to find that they did indeed taste like a combination of Greek salad elements, particularly the feta cheese, with a heavy dose of flavoring. Everyone could taste the cheese, but people were mixed on how much the other two pieces of the puzzle were present. Some people could taste a bit of oregano and a hint of olive in the aftertaste; others didn't notice any olive at all. Regardless, just about everyone said the taste was just a like a Greek salad and liked these a lot.

Smell test: Smells like a Greek salad, heavy on the feta cheese.

This snack was discovered by Jeremy at Baldree's No Frills, Gananoque, Ontario. Review published September 2010.