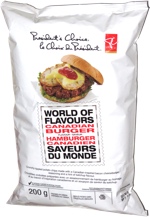 Taste test: It's been several years since I've gotten my hands on a new potato chips flavor from President's Choice, and evidently they've done away with their Ziploc-style resealable bags. I'm not going to complain about this, because those bags were a bit awkward to open, plus they seemed rather unnecessary, as the President's Choice flavors are almost always so delicious that resealing the bag to finish later is really a non-issue.

The chips were cut thick and had wide, dull ripples, with a light orange color generally and a good helping of seasoning on the surfaces. I crunched in to find a very nice crispness and a fairly soft crunch (though more solid at times) with a nice mix of flavors, strong but not super-intense. The description on the bag promised a burger with cheddar, bacon and ketchup, yet I couldn't strongly taste any of those things. But it was a nice tangy mix, with barbecue-like taste at first and maybe some hints of beef in the aftertaste. Tasty.

From the package: “Recreating the mouth-watering flavours of a Canadian barbecue favorite — grilled beef burger with white cheddar, back bacon and ketchup — these crunch rippled chips are a tradition in the making.”

This snack was discovered by Amy and Mary Anna in Montreal. Review published March 2016.