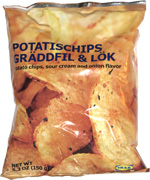 Taste test: These potato chips had generally wiggly shapes, with mostly a yellow color but lots of browning too. There was some skin and other dark areas around the edges of some chips, plus some green seasoning.

I crunched in to find a very nice crispness, with the level of crunch varying from chip to chip, plus lots of sour cream flavor. I could taste a bit of onion too, but it was the sour cream that really stood out, and it mixed really well with great potato flavor. If you get sour cream and onion chips mostly for the sour cream, this is the one to buy.

Smell test: Good potato smell with some nice onion too.

From the package: “Potato chips, sour cream and onion flavor”

This snack was discovered by Jeremy at IKEA. Review published June 2012.