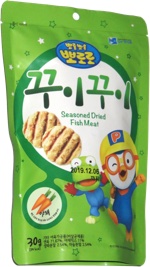 Taste test: This bag had the same mascot as the very different Pororo Banana Snack, accompanied in this case by a frog, but this was a very different snack. The shapes were sort like rippled potato chips, except rippled on one side and flat on the other, but they weren't potato chips at all, as they were made from fish.

We crunched in to find a very light feel, not like jerky at all, somewhat like a potato crisp. But they definitely tasted fishy. When we shared them around, some snackers immediately gave a thumbs-down, while others said they enjoyed the taste (in some cases changing their minds about this after eating several pieces). Some people compared the taste to cat food.

We were lucky to have a dog named Pumpkin on hand during this tasting session, and its owners invited us to let Pumpkin try some Dried Fish Meat. We don't normally have dogs help us review snacks (the only previous time we did this was for SmacklePuffs, which was explicitly a dog snack) so we were pleased to find that Pumpkin seemed to quite enjoy this one.