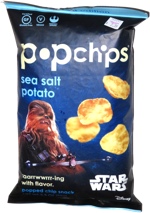 Taste test: I bought this bag not because it stood out as a new flavor, but because Chewbacca was on the front of the bag, making it a necessary purchase as part of The George Lucas Diet. But on closer examination, it turned out that it was a new flavor — Taquitos.net hadn't reviewed a Sea Salt version of the potato-based Popchips.

The taste and texture were very good, with a nice crisp crunch and lots of potato flavor. It reminded me a whole lot like the first Popchips product that Taquitos.net reviewed, which was labeled at the time as as Original Potato Chips. It seems that this Sea Salt version has replaced the "Original" in the Popchips lineup, as the Original (which didn't mention Sea Salt) is not shown on the Popchips website, and Sea Salt inherited the same color scheme. They also dropped the "Potato Chips" label that was on that Original bag, which makes sense, since Popchips really are crisps, not chips.

From the package: “Join the snacking rebellion. Whether you're fighting against intergalactic domination or simply need an afternoon nibble, there is no need to resist this snack. Popped crispy and full of flavor, it's the snack we've all been craving. Avoid the fried side. A long time ago in a galaxy far, far away… there was a snacking rebellion. Radical snackers struck a blow against the oil-laden, fried chip empire when they demanded a new kind of chip. The power of the Force was harnessed for popping and now people everywhere can enjoy Popchips in support of the dark side (all the flavor) or the light side (half the fat fried chips*). 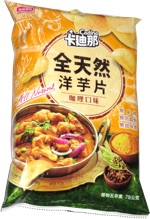