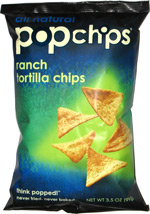 Taste test: These triangular chips had a light beige color with a light sprinkling of mostly green seasoning, so from a distance their overall look wasn't all that different than Cool Ranch Doritos, but on close examination the surface looked quite different, with less texture and less stuff on it.

I crunched in to find that the chips were thinner than the round versions of Popchips while being much less dense than Doritos. They were maybe slightly thicker than Doritos, but the low density gave them less overall bulk. On the first bite, there was a good but very mild (far from zesty) ranch flavor, and it quickly died away in favor of just the taste of the underlying corn, which was pretty ordinary. Compared with the corresponding flavor of Doritos, both the seasoning and the corn chip were an order of magnitude lower in intensity of taste. Not a bad taste, but a weak one, and since that went along with a generally weak crunch, these were, well, weak.

Smell test: Kind of weird. Not that bad, but not like ranch at all.

From the package: “We don't mess with tradition. We start with stoneground masa, the same whole grain used to make traditional tortillas. We add a little heat and pressure to pop our chips, and then top them off with the finest all-natural seasonings for tortilla chips so tasty and crispy you won't even notice they're (we hesitate to say) healthier.”

This snack was contributed to Taquitos.net by the manufacturer. Review published March 2013.