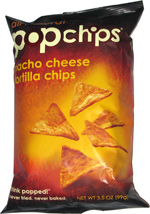 Taste test: After years of offering round Popchips that defined their own new category (and have seen quite a few imitators), the Popchips folks have made a turn in the Doritos direction. These Popchips-inspired, triangular, corn-based chips had a nacho cheese flavor — and lots of it. The chips were light orange-colored equilateral triangles, with generally flat surfaces and just some minor wiggle.

I crunched in to find that the chips were quite a bit thinner and denser than the various kinds of round Popchips, while also being less crunchy, and slightly thicker and less dense than Doritos, though less crunchy than those too. The crunch level did vary from one piece to the next, but in general, the crunch was very soft, nearly nonexistent, so not crispy at all. Some of the pieces did have a more Popchips-like crunch. On my very first chip, I noticed that the cheese taste was very nice, as it was intense, like a nacho cheese dip. After that, I noticed how much the cheese levels varied from one piece to the next, as some were positively loaded with powder (leaving some on my fingertips) while others had relatively little.

Our tasters liked these a lot, as some people though they were just like Doritos and liked that, while others noticed differences but liked those differences.

Smell test: Kind of weird, but not bad.

From the package: “We don't mess with tradition. We start with stoneground masa, the same whole grain used to make traditional tortillas. We add a little heat and pressure to pop our chips, and then top them off with the finest all-natural seasonings for tortilla chips so tasty and crispy you won't even notice they're (we hesitate to say) healthier.”

This snack was contributed to Taquitos.net by the manufacturer. Review published January 2013.