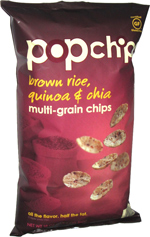 Taste test: When Popchips first burst onto the snacking scene, they made quite a splash by offering chips that were ostensibly healthier, and yet unlike others who had tried that before, Popchips had a great texture and were quite flavorful. Part of the success was driven by the fact that they offered varieties that mirrored popular potato chip flavors such as sour cream & onion and barbecue — and although they didn't taste quite the same as potato chips, they actually tasted good and had a great texture.

When I spotted this bag, not claiming a parallel to potato or corn chips but rather boasting brown rice with quinoa and chia, I wondered whether Popchips' success streak was in jeopardy. The Costco-size bag was enormous at 18 ounces. We opened it to reveal round, off-white chips with a low density of white and black seeds embedded inside. They were thin and felt like rice chips, with smooth surfaces. We crunched in to find that this was indeed quite a departure for Popchips, as they were thinner than other round Popchips and had just a good crispness (rather than the usual great one), but it was a crispness fairly typical of rice chips. There was a light crunch, with the main flavors being sea salt and a subtle rice taste. A few people were underwhelmed by what they found to be a bland flavor, but others were in heaven with these, taking advantage of the huge bag to crunch on handful after handful after handful. Our snacking panel included a vegan and someone with wheat allergies, and they were both big fans.

Smell test: Definitely different than any other PopChips

From the package: “We've planted the seed of something awesome. Our brown rice, quinoa and chia multi-grain Popchips are easy to fall in love with. We are talking whole grain brown rice, nutrient-rich Chia seeds, quinoa and a light sprinkling of sea salt for a multi-grain chip that is one delicious and seriously good snack.”

This snack was discovered by Jeremy at Costco. Review published January 2014.