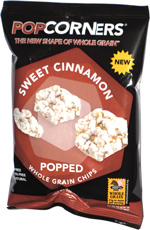 Taste test: These chips were cut into hexagonal shapes, just like the Memphis BBQ flavor from PopCorners, but unlike most of the other PopCorners, which are triangles. The surfaces were very wiggly, with mostly an off-white color, except for dark brown seasoning confined mostly to the many crevices.

We crunched in to find a middling level of crispness and a somewhat soft crunch, with a reasonably strong cinnamon sugar seasoning. The cinnamon wasn't as intense or sweet and many of the other cinnamon sugar snacks we've tried, but it was still pretty good. Not bad, but our snackers were much more impressed by the Memphis BBQ ones.

Smell test: Mostly like cinnamon toast, but also a little of something else not quite so sweet.

From the package: “The brand that brought you the new shape in popcorn has shaken up the snack aisle once again. Introducing the new shape up whole grain — a sensible snacking solution that is all natural, gluten free, and non-GMO. Now you can snack smart with the crispier crunch of whole grain without worrying about any artificial ingredients.”