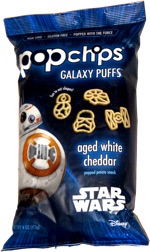 Taste test: During my 51-day George Lucus Diet in 2015, Popchips played a big role, as their marketing agreements with Disney produced several different Star Wars-branded bags, supplying me with snacks for three of the 51 days. Although the bag designs were nice, the snacks inside were just regular Popchips, without any Star Wars shapes. They've corrected that deficiency with this new snack, as Galaxy Puffs included five different Star Wars shapes.

I opened the bag to find that the snacks looked nothing like any of the other Popchips, and I crunched in to find that the texture was entirely different as well. The front of the bag said "popped potato snack" but the ingredients actually included both potato and corn. They came in five shapes: BB-8, the Millennium Falcon, a stormtrooper, X-wing fighter and R2-D2. The shapes weren't even consistent, as most were distorted from the ideal pieces pictured on the bag. The X-wing and R2-D2 generally reproduced the intended shapes best. The Millennium Falcon looked more like an off-center flower. BB-8 was barely recognizable in many cases.

As for the snack itself, it was OK, but frankly not as good of a taste or texture as original PopChips. The taste was a lot like Smartfood. The texture wasn't, of course, but it wasn't anything like Popchips either, as it was denser and crunchier. OK, but not something I'd get again if not for the Star Wars connection.

From the package: “Popped with The Force” ... “Non GMO” ... “Gluten free” .... “these are the snacks you been looking for. every Jedi knows that boring snacks are the path to the dark side, but munching on popchips galaxy puffs is your first step into a larger snacking world. we found a new way to use heat to pop this light and airy snack into your favorite Star Wars shapes.”

This snack was discovered by Daisy Chow at Shaw's at Boston University. Review published September 2017.