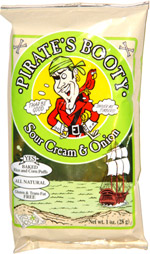 Taste test: This version of Pirate's Booty consisted of smallish curls with a whitish color, with some green seasoning visible on the surfaces.

I crunched in to find mildly seasoned puffs with a surprising amount of crunch. They sure appeared to be soft on the outside, but some of the pieces had a slightly more solid crunch on their interiors, and it felt nice. After experiencing a mild onion taste on the initial pieces, the intensity of the flavor increased quite a bit as I ate my way toward the bottom of the bag. They were good enough that I ended up eating the whole bag in one sitting. It was a big change from the cheese flavoring of the original Pirate's Booty and I liked it a lot.

From the package: “Ahoy matey! Drop anchor and discover our crunchy treasure, Pirate's Booty. These tasty puffs are baked to perfection with real, all natural ingredients. Pirate's Booty Sour Cream & Onion is a great-tasting snack made from rice and corn blended with zesty onion and the cool, fresh taste of sour cream.”