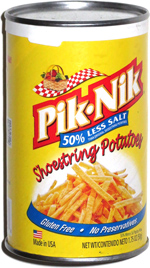 Taste test: These were some of the worst potato sticks that we've ever tried.

They seemed a little less crisp than standard potato sticks, but that was the least of their problems, as they just didn't have much taste. It seems that when they took away half of the salt, they took away just about all of the flavor, so these were about as bland as can be. If you do buy these, might want to bring along your salt shaker before eating them.

From the package: “For over sixty years, Pik-Nik has been making the highest quality, best-tasting shoestring potatoes in the world! Now Pik-Nik makes a 50% Less Salt version of your favorite snack. Same great taste with half the salt.”