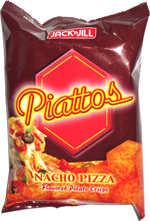 Taste test: When I saw this bag with the words "Nacho Pizza" on it, I instantly knew I had to try it, because Nacho Pizza isn't really a thing that I'm aware of. This was further reinforced by the picture on the bag showing loaded nachos on pizza, as distinguished from "nacho cheese pizza" — which isn't a thing either, but it's closer to being a thing than Nacho Pizza.

I opened the bag to find that the crisps were smallish hexagons, but not regular hexagons, as the angles of the vertices varied rather than being uniformly 120 degrees each. Continuing the geometry lesson, the surfaces of any given piece were generally curved, rather than existing on a plane. I crunched in to find a good crunch and pretty good crispness, but as for Nacho Pizza flavor — nope. It was just a typical cheese-on-potato-crisp flavor, not even much of a spicy nacho cheese. Pretty good, but I'm still on the hunt for the elusive Nacho Pizza.

From the package: “Just when you thought the delectable taste of Piattos couldn't get any better — it now comes in Nacho Pizza flavor! Piattos I sounds you with flavorful taste of Pizza! Who wouldn't love that? Especially when it comes in chips so light and crispy — you'll definitely enjoy the flavor that is distinctly Pizza! With the tangy tomato sauce and rich nacho cheese. So go ahead, indulge in the flavorful slice, er ... chip of Piattos Nacho Pizza!”