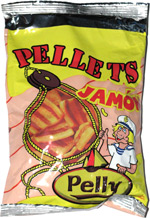 Taste test: These potato-based snacks didn't really look like bacon, but they tried, as they had bacon-like stripes, but the puffs were thicker, puffier and differently shaped than bacon.

The ones pictured on the bag were short strips with the stripes running lengthwise, but the actual ones in the bag had their stripes rotated 90 degrees, going across the strips (contrary to how it works with real bacon), so that was odd. The taste was pretty good, with a good crispness and sort of a smoky flavor, not precisely bacony, but not entirely unbacony either. Our bacon-loving tasters enjoyed the taste.

This snack was discovered by Judy in Cuba. Review published June 2011.