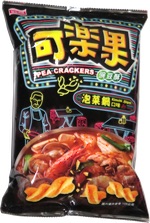 Taste test: The spiral snacks in this bag of Pea Crackers had looked mostly like the other flavors and promised Kimchi Jjigae flavor, representing not just the first snack we've reviewed with that flavor, but the first word I've ever seen that had the letter J repeated twice to start the word.

I had no idea what Kimchi Jjigae even was, but some Googling revealed that it's a stew featuring kimchi and various other stuff (typically starting with pork or seafood). Since the picture on the bag showed lots of seafood things, I took that to be the intent here, despite the lack of any actual seafood in the ingredients.

I crunched in to find a great tangy flavor, pretty strong but not super strong, with a nice mix of the pickled kimchi flavor and a seafood broth. There was just a mild heat. Very tasty, very good!

From the package: “Product of Taiwan”

This snack was discovered by Jeremy at Super 88, Boston. Review published December 2020.