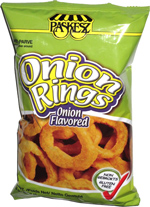 Taste test: This bag was filled less than halfway with wide-cut but very wiggly sort-of-rings (i.e. they generally connected all the way around but were not shaped much like rings) with a semi-shiny light beige surface that included some green specks.

We crunched in to find a middling crispness and soft crunch, with a very mild onion flavor, mixed in with at least as much potato flavor. The onion was far less intense than, say, Funyuns, but it wasn't just different in intensity as it was a weak onion flavor, neither sweet nor with the onion kind of kick. The aftertaste was all potato. Not bad, but nothing special here compared to the many other better onion rings we've tried.

Smell test: Similar to some other potato snacks, but kind of weird.