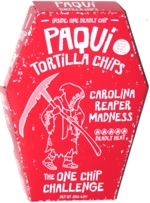 Taste test: We've reviewed a lot of chips that claimed to be hot (a handful lived up to the hype, while most did not) but none that made the claim quite so strenuously as these. Paqui billed this flavor as "The One Chip Challenge" that was "Made with the Hottest Pepper in the World." Was the hype justified?

It was! Paqui's own Haunted Ghost Pepper chips were impressively hot, some of the hottest we've ever tried, but Carolina Reaper Madness was something else entirely. Keeping in mind the warnings on the package, the tasters for this one were self-selected as people who like hot peppers and can handle some very hot stuff. Most ended up eating far less than one full chip, and yet even with the tiny pieces that people ate, for nearly everyone, the hot pepper had an effect was immediate and lasting. It was a stop-you-in-your-tracks (and run for water) effect right after crunching in, just a huge and immediate effect on the body. It was a heat that kept on growing. Water brought only temporary relief. Milk helped more, but only time really did the job, as it took five to 10 minutes for most people to feel somewhat normal again.

One of these tasters (we'll call him "Esteban") has a reputation for being able to eat any hot stuff, no sweat — he's eaten spoonfuls of Dave's Insanity Sauce with no apparent impairment. He's the only one who munched into a full chip here, and again there was no immediate reaction. He said it wasn't hot. The chip had the last laugh, as it caught up with Esteban about a half hour later — Esteban was unable to hold it down. It might have been the raw heat of the chip, the fact that he ate it for breakfast on an empty stomach, or some combination of factors.

Smell test: Can smell some peppers, but not really anything hot about the aroma.

From the package: “Inside: One deadly chip” ... “Deadly heat” ... “Homemade Hell®” ... “This chip is crazy hot and not for the faint of heart — or stomach! Heat seekers may eat at their own risk: not everyone will enjoy the extreme heat! If the heat is too much for you, try drinking milk or eating ice cream. Do not eat if you are sensitive to spicy foods; allergic to peppers, nightshades, or capsaicin, Or are pregnant or have any medical condition. Keep out of reach of children. After touching chip, wash your hands with soap and do not touch your eyes or other sensitive areas!”