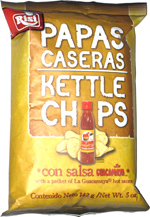 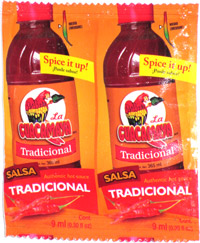 Taste test: These potato chips had very wiggly shapes and colors ranging from yellow to golden yellow with some brown areas, plus some bits of skin on the edges.

When I opened the bag, that's all that I saw, but the other part of the equation was that somewhere in the bag, there was supposed to be a packet of hot sauce. After I spilled some chips out onto a plate and shook the bag around, I finally found the packet, but even then I had to reach deep into the bag to grab it. It was a bigger packet of hot sauce than expected, kind of like ketchup packet except wider, sort liked a doublewide. There was lots of oil from the potato chips on the outside of the packet. On their own, the chips were very crunchy with a good crispness, loaded with lots of salt and quite flavorful — very good kettle-cooked chips. I poured the hot sauce packet into a dipping plate and found that it was fairly thick. When I dipped some chips into the sauce, I was impressed by the flavor and heat. Pretty hot at first, and a strong, lingering hot aftertaste too. Really went well with the chips, a great combination!

From the package: “The best things in life are the simplest. Our RISI® Papas Caseras are precisely that; the simple yet irRISIstible™ natural taste of the potato, kettle-cooked to perfection with just the right amount of salt. In each packet, you'll conveniently find a packet of the spicy, savory La Guacamaya® hot sauce for you to pour onto your Papas Caseras and make them as hot as you can take it.”