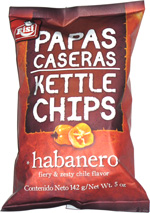 Taste test: These potato chips had a bright orange glow to them, with wiggly shapes and some bits of skin on the edges, and they appeared to have lots of flavor powder on their surfaces.

I crunched into to my first chip to find a very high level of crunch, as it was cut fairly thick and had a solid feel. The habanero taste arrived immediately, but the corresponding heat was slightly delayed. When the heat did arrive, it was reasonably hot, especially after eating several chips in rapid succession — which was hard to resist doing, since the chips were also quite tasty, as the flavor of the potato and mix of spices was really good. The heat didn't approach the levels of the hottest of the habanero chips, but the great crunch and excellent flavor still made these excellent chips.

From the package: “fiery & zesty chile flavor” ... “The pure taste of the habanero chile, nothing more, nothing less.”