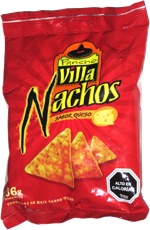 Taste test: These tortilla chips looked largely like Doritos, with the same surface texture and range of colors, but the triangular shapes were a bit different. The shortest of the three sides was a bit extra-short compared to Doritos, making for a pointier isosceles triangle, and the overall size was smaller.

We crunched in to find a nice light, crisp crunch, with a wide variation in the level of cheesiness from one chip to the next. Some had hardly any cheese, at least when compared to your average Dorito, while others had a reasonable helping of it. The cheese tasted different from the Doritos nacho cheese, and it was pretty tasty.

From the package: “#revolucionachos” ... “Ûnete a la revolución del sabor”

This snack was discovered by Judy and Lee in Santiago, Chile. Review published December 2017.