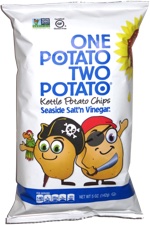 Taste test: These potato chips had a strong yellow color, with many wiggles in the shapes of the generally small chips, plus lots of dark skin on the edges.

We crunched in to find that they were cut thick and very crunchy, with a solid crunch that won't break any teeth but might make enough noise to prevent you from snacking in secret. There was a lot of vinegar zing, so much in fact that it was tough to notice much potato beneath the vinegar, but there was a nice rich potato aftertaste once the vinegar wore off. Very good!

From the package: “At One Potato Two Potato we believe in a world where a snack food that's better for you can still be exciting and tasty. So here's to a world naturally fun and delicious, as was meant to be! Simply natural.” ... “Seasoned potatoes were created in Ireland in the 1950's. Salt & Vinegar was one of the first flavors. Potatoes are grown in all 50 states of the USA and about 125 countries throughout the world.”