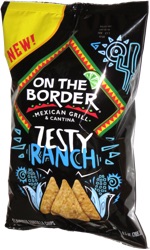 Taste test: Much like On the Border's Nacho Cheese version, these tortilla chips appeared to be a direct knockoff of Doritos, in this case the Cool Ranch flavor. They had a very similar appearance, with the same triangular shapes and sizes and a similar yellow surface with some seasoning powder.

When we crunched in, the texture seemed largely the same too, but as we shared the bag with lots of snackers enjoying some beers after a run, people were pretty consistent in saying that these chips tasted noticeably better than the corresponding Doritos. The ranch flavor was zesty indeed, very tasty!