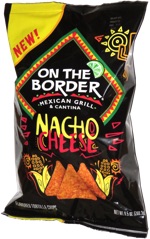 Taste test: These weren't the first nacho cheese tortilla chips from On the Border that we've tried, as we previously reviewed their Cafe Style version, and whereas the others were a fairly original product, this one was basically a Doritos clone.

The chips had the same triangular shapes as Doritos and a similar surface texture with a generous coating of orange powder, though the level of coating did vary by chip. We crunched in to find a crunch that was slightly more solid and less brittle than Doritos, but still in the same ballpark. The taste was very cheesy and very salty, perhaps saltier than Doritos. Not an exact match for the Doritos cheese, but still a very similar product. Pretty good.

Smell test: Good toasted corn and cheese smell, a bit more to the corn end of the scale than Doritos.