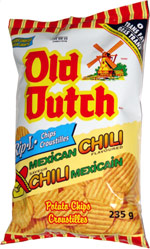 Taste test: The most striking thing about this bag of chips was that they were Mexican-flavored chips, made in Canada, and we ate them in the USA.

The wide-rippled potato chips in the bag were cut thick, and many of the chips in the bag were quite large. They had a good crunch and a very good crispness when I bit in. They tasted good, with a nice mix of spices similar to what might be used to spice up a bowl of chili. However, they tasted like a bunch of spices, rather than like a bowl of chili, a feat that several other chips we've tried did successfully accomplish. Still, most of our tasters did like these a lot.

From the package: “A Canadian flavour favourite! It started in Winnipeg in 1954. A little known potato chip company with a lot of heart and a passion for quality became the talk of the town. Since 1954, news of these great tasting chips spread across the country. Today the Old Dutch name is recognized by Canadians from coast to coast.” ... “Trust the Windmill!”

This snack was contributed to Taquitos.net by the manufacturer. Review published March 2009.