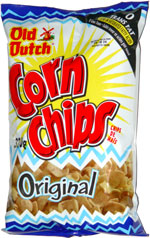 Taste test: These chips looked pretty much the same as the standard Fritos, with a similar width, varying lengths and similar characteristic random curls, though these looked to be generally a little less curvy than Fritos.

When I bit in, the crunch was good, and the taste was very similar to Fritos, but these were less salty and generally had a less intense flavor. These also didn't seem as greasy as Fritos. They were still good and still tasty, but there was just not as big of a hit of corn flavor. The advantage was that there wasn't as much salt buildup as with Fritos, so it was easier to eat more chips.