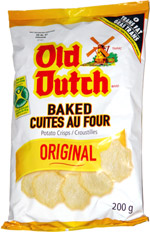 Taste test: These thin crisps were kind of like Baked Lay's, except with more irregular shapes and a crunchier feel to them.

The crisps were very flat, with sort of spiky polygon edges. I kind of liked the taste when I first bit in, as the salt brought out the potato taste reasonably well for a decent flavor. It seemed to go downhill a bit after that, as the taste really seemed bland if I ate several crisps in a row. Decent if you're really hungry or insist upon baked chips, but not something I would buy for the taste.

Smell test: Very mild, but smells sort of like a baked potato.

From the package: “Old Dutch® Creamy Dill Baked Potato Crisps — the great taste of creamy dill with 0 trans fat and only 4g of fat per 50g serving. In the best Old Dutch® tradition, these carefully baked potato crispsuse only the best ingredients to create uncompromising taste.” 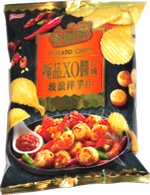