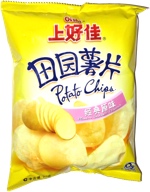 Taste test: These potato chips had a pale yellow color, with most of the chips fairly small and having of a slightly powdery look on the surfaces. The color was very uniform, except for some small bits of browning on one edge of a small minority of chips. The major oddity here was that that they were labeled as "Plain Salted" but a quick look at the ingredients revealed that rather than just containing potatoes, oil and salt as expected, they substituted "Flavors" for the salt, specifying that it included several things (including MSG) in addition to salt.

I crunched in to find a very soft crunch and a good but very mild potato flavor. It wasn't bad, but it was no better (and generally weaker in flavor) than your normal potato chips with just salt. It was missing the fresh potato taste. I guess I don't see the point of the special MSG-inclusive formula, except maybe that they wanted to use less salt. Usually MSG is part of flavored potato chip recipes, but with no special flavor, it just seems unnecessary.

Smell test: A little different than plain salted potato, but not really strong, so OK.

This snack was discovered by Jeremy at Super 88, Boston. Review published February 2016.