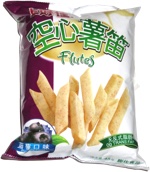 Taste test: These wheat- and potato-based "Flutes" were shaped kind of like penne pasta, except with a squarish profile instead of a round one, and without the subtle ripples running the length of each piece. They had a very sparse coating of purplish stuff on the surfaces. The tubes were hollow, but the walls were fairly thick.

I crunched in to find a light, fairly crisp crunch, with an unusual mix of tastes, as they had a potato crisp type of flavor initially, followed quickly by a sweet blueberry flavor. Not bad at all, but not something I'm really craving to have again.

From the package: “Product of China”