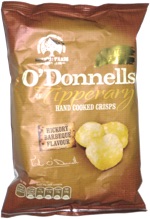 Taste test: These chips from Ireland had wiggly shapes and a nice golden yellow color, with lots of skin on the edges and a light smattering of seasoning on the surfaces.

I crunched in to find a tasty mix of spices, including meat and hickory flavor. A nice spicy aftertaste too! A big departure from most American barbecue chips and even hickory barbecue ones, but quite tasty and very good.

Smell test: Not the typical BBQ smell at all, but it actually does smell like barbecued meat.

From the package: “Used in Ireland since ancient times, traditional smoking methods have inspired the rich taste of hickory which infuses each of these delicious O'Donnell's crips for that unique spicy and sweet barbeque flavour.”