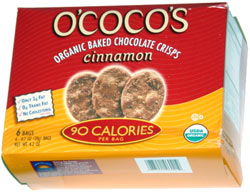 Taste test: These were thin, round crisps, with bubbles in some of the pieces that made them thicker.

You could see sugar granules on both sides of the crisps. There was lots of cinnamon taste, and it mixed well with chocolate, but the cinnamon really stood out as the dominant taste over the chocolate. Most of our tasters liked these a lot, a quick hit of chocolate with lots of cinnamon.

From the package: “All good & no guilt: O'Coco's are a new way to do chocolate — baked so they're light on fat, all-organic, and just 90 calories. They satisfy your cocoa cravings with intense chocolate taste and fun crispy crunch. O'Coco's. For a new snackitude.”

This snack was contributed to Taquitos.net by the manufacturer. Review published March 2007.