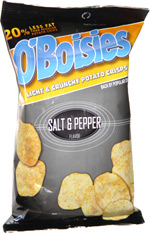 Taste test: These thin, oddly shaped potato crisps had a beige color, with small bits of black pepper visible on the surface.

The shapes seemed to be random, with some wiggle to the surface and lots of bubbles embedded inside. Upon biting in, the crisps were very crunchy and highly crisp. But the high level of crunch was unusual: Though it was a loud crunch, it was also a crumbly crunch, not one that will cause any earthquakes. That made for a very nice feel a really nice texture. The taste was very good as well, with a fresh, sharp peppery taste that mixed well with the potato. Our tasters enjoyed these a lot, returning for seconds. Glad to see the return of O'Boisies!

Smell test: Smells like a baked potato with black pepper.

From the package: “Take your taste buds back in time to the familiar crunch of O'Boisies®! Of all the potatoes in the world, only a few are O'Boisterous enough to become O'Boisies® potato crisps. These bubbly golden crisps deliver a crackly crunch ordinary potato chips can't match.”