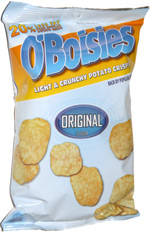 Taste test: These potato crisps had a thin cut and a very bubbly appearance.

The texture was typical O'Boisies — which is to say, about as good as it gets with potato crisps, as they were very crisp and had a great crunch. When I saw that this one was Original Flavor, I figured that it wasn't going to have much seasoning compared to the other O'Boisies varieties, but it turned out that I was dead wrong. The O'Boisies folks seasoned these with a great mix of spices, with garlic being the one that stood out the most. Very tasty.

Smell test: Sort of remotely potatoey, but not really that fgood.

From the package: “Light & Crunchy Potato Crisps” ... “Back by popular demand!!!” ... “20% less fat than regular potato chips” ... “Take your taste buds back in time to the familiar crunch of O'Boisies®! Of all the potatoes in the world, only a few are O'Boisterous enough to become O'Boisies® potato crisps. These bubbly golden crisps deliver a crackly crunch ordinary potato chips can't match.”

This snack was discovered by Jeremy at Dollar Tree. Review published November 2009.