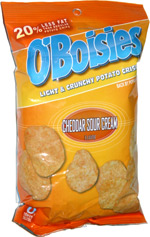 Taste test: This version of O'Boisies had the same good crunch that O'Boisies is known for, with a really nice texture, but our tasters were mixed when it came to the taste.

Everyone was much more excited about the salt and pepper flavor than they were about this one. The flavor was highly concentrated on some of the chips (as indicated by the bright orange color) and it just was too much, too intense (something that I rarely say when it comes to levels of flavor) and not particularly good. It was more chemically than sour creamy and oniony. After eating a few of these, the flavor did remind me of cheddar and sour cream and tasted OK, but still not in a great way. One of our tasters liked the taste and crunched on quite a few of the O'Boisies, but most gave a thumbs-down.

Smell test: Kind of intense, but a bit chemically and not that much like cheddar or sour cream.

From the package: “Take your taste buds back in time to the familiar crunch of O'Boisies®! Of all the potatoes in the world, only a few are O'Boisterous enough to become O'Boisies® potato crisps. These bubbly golden crisps deliver a crackly crunch ordinary potato chips can't match.”