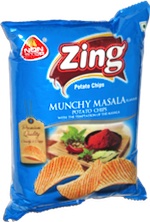 Taste test: These potato chips had narrow ripples, with a nice range of yellow and orange shades glowing throughout, plus some slightly darker orange seasoning bits settled into the troughs of the ripples.

I crunched in to find a taste that was tangy and a bit sweet initially, with just hint of anything spicy or hot, but it soon transitioned into a masala flavor that was both of those things. It wasn't super hot, but it was moderately so, and the mix of different spices was quite nice. Tastier than most of the other masala chips we've tried, really good!

Smell test: On first whiff, it seemed almost like Mexican spices, except on the tomatoey side, but I did get a hint of Indian food after that.

From the package: “Contains added flavour (natural and nature identical flavouring substance)” ... “with the temptation of the masala” ... “Premium Quality Crunchy 'n' Crispy”