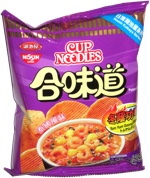 Taste test: These potato chips promised the flavor of Tom Yum Goong soup, or at least the instant noodles version of it. I quite enjoy that particular soup at Thai restaurants, so it sounded great to me.

I opened the bag to find narrow-rippled chips with lots of orange throughout, plus some larger, darker orange seasoning bits in some areas, particularly in the troughs of the ripples. I crunched in to find a light crunch and a midly tangy flavor to start, growing noticeably hotter soon after, with some heat lingering in the aftertaste. The taste wasn't entirely unlike a spicy Asian soup, but I've had Tom Yum Goong many times, as well as some snacks that succeeded in delivering that flavor (including this bread and these pretzel sticks), but this one largely missed the mark.

From the package: “Contains anchovy, sardines, coconut, shrimp and soybeans.” ... “Product of China”