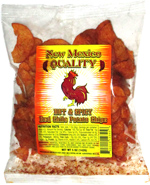 Taste test: These potato chips were generally smallish and wiggly, and they were quite loaded up with a dark orange/red seasoning.

Based on what it said on the bag, our snackers were expecting some serious heat. On the first bite, there was lots of intense flavor, but the heat that people expected wasn't all there. It did hit more strongly in the aftertaste, though these were still far from being the hottest chips ever. People were mixed on the taste: Some people though it was OK, some didn't like it at all, and nobody really raved about it.

Smell test: Kind of tangy mix of spices, but not really hot.

This snack was discovered by Jeremy at Eldorado Supermarket, Santa Fe (at The Agora Shopping Center). Review published .