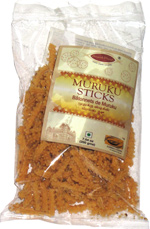 Taste test: These oddly shaped snacks had an orange/beige color and looked sort of like caterpillars, but we checked the ingredients to make sure and found that they were made mainly from rice.

Most of our snackers had a similar experience when they crunched in, as they initially found that there was a mild crunch but barely any taste at all. Most people got hit with some chili pepper and cumin kick in the aftertaste, but it didn't arrive until after a considerable delay. Our tasters generally didn't find these to be awful, but most people just didn't like them much, as they thought the taste was odd.

From the package: “At Everrich Foods, we reinvent traditional recipes with good manufacturing practices. Our sweets, savories and snacks are made under utmost hygienic conditions using only the best ingredients. Be it the product or the packaging, we ensure quality at every stage of production.” ... “Ingredients: Rice Flour, Besan Flour, Vegetable Oil, Salt, Cumin Seeds, Chili Powder” ... “Product of India”