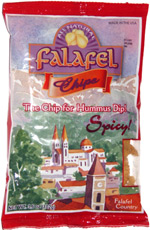 Taste test: These round chips looked sort of like tortilla chips but had a dark beige/brown color, with some black spots throughout.

When I first crunched in, they really didn't taste very much like falafel, and they were not the least bit spicy or hot either, so that was confusing. As I at a few more chips, a fairly strong heat arrived and, concurrently, the flavor became increasingly falafel-like. It still wasn't a dead-on falafel flavor, but I could see how one might interpret the flavor a falafel. The crunch and crispness varied from one chip to the next. Some of the chips were kind of soft and not crisp, but others had a pretty decent crunch. I dipped several of the chips into some hummus (as suggested on the bag) and it was a nice combination, especially after the heat had kicked in.

From the package: “Falafel, a Middle Eastern seasoned vegetarian patty rich in protein and fiber, has been served with hummus dip for hundreds of years. Falafel Chips deliver the same delicious flavor are the the world's first and only chips created for hummus dip.”

This snack was contributed to Taquitos.net by the manufacturer. Review published April 2009.