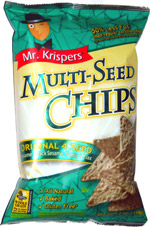 Taste test: It was extremely difficult to get this bag open, as I pulled and pulled at the top for several minutes, making little progress.

Eventually I gave up and went looking for a scissor. Inside the bag were large, triangular chips a with Japanese rice chips sort of texture. There were seeds embedded inside the chip, rather than just stuck to the outside. The chips had a nice texture and tasted like the four seeds mentioned on the bag (sesame, black sesame, poppy and flax), but there was not an intense taste of any of them, as it was more of a weak taste of all four. Still, these were pretty good, but it seem that Mr. Krisper may have been trying too hard to combine lots of seed flavors, rather than concentrating on having a good strong flavor.

Smell test: Strong smell, probably some seeds in there, but not that good.

From the package: “Sesame, Black Sesame, Poppy & Flax” ... “50% Less Fat than regular tortilla chips” ... “Mr. Krispers Mlti-Seed Chips • were created by a fusion of cultures - tempting taste sensations from the West, fused with traditional bake drice snacks from the East. Asian cultures have been enjoying the health benefits of brown rice and seeds for thousands of years.” ... “• Vegan • No bioengineered ingredients”